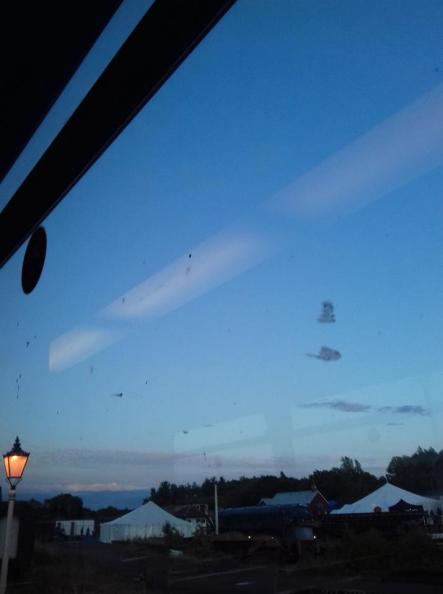 The blue train of Indietracks 2018 has just passed, and the first carriage seems like a heartbeat away. A Thursday lost in Ripley’s Talbot Tavern to the sting of the Gamma Ray and the Dancin’ Duck tumbled into one fine weekend amongst the old trains on the Midland Railway.

The thunder woke us like Cash’s Mexican trumpets early on Friday. The glorious summer of the past couple of months had saddled up on Harpo’s horse. A shit, shower and shampoo later though and nobody cared. As sawdust turned to dirt on the outside stage, Worst Place cut the chord with a sweet shoegaze shimmer, their ‘Dreamer’ rolling like paths through the bluebells. Sacred Paws scratched at God’s heart and The Lovely Eggs’ surreal cartoon beat-fuzz fantasy went down a treat. The train carriage bar outside the locomotive shed was soon in motion and the first discotheque (provided by DWaBF, two hands at the same time) went off with a Pop and a bang, the big shed speakers clicking into life with a sonic boom to carry us through.

As is tradition, the dancefloor spilt down the long, dark country path to the Golden Valley, and everyone went like fuck till late.

Saturday at Indietracks came with the familiar hum of the campsite carts rushing back and forth and the din of morning campers waking to empty cans outside their tents. The unique collection of passionate Pop collectors that come to this festival slicked their hair and got ready to be heartbroken. At the festival site a dose of Ghum’s goth soul brought in on the morning milk train started it off.  Eureka California give us a second dose, roaring and shaking outside like Weezer caught by the fuzz of Joanna Gruesome and Tyrannosaurus Dead. Happy Accidents soared in a barrage of heavy melody, and Linda Guilala of JUNIPER MOON rode on sweet blasts of synth, drum and bass-propelled Pop.

The cooing of owls from the rescued bird sanctuary outside brought out the Night Flowers in the locomotive shed, shimmering like the Kids of Carlisle with hit after hit of winding nuggets. A copper ale oils the pipes, and more sweetness lay outside with Darren Hayman stopping time playing the first Hefner LP ‘Breaking God’s Heart’ right through. A front-heavy album like the Joshua Tree he says it is. The Sweetness Lies Within, The Sad Witch. Hymn for the Postal Service, Love Will Destroy Us in the End and The Librarian are classics from a Godhead of modern Pop, sung on a unique, wonky soul pitch, poetic coils sending shivers inside, but if the rest of these songs are fillers they’re pretty good ones. The sweet lyrical lines roll one after the other, and when it’s done we might as well pack up and go home.

The little railwaymen’s church, where earlier we managed to miss ace scousers Marble Season, is bouncing behind us though, breaking the spell at least a little. Paris, France’s French Boutik hammer out a terrifically twisting set of noir punk here, before Dream Wife cap off a golden spell with a set of gender violence-busting post-punk theatre tighter than a pink glove; bass, drums and guitar going like fuck, stopping, starting and flying around the classic rock star-breaking postures and sculpted staccato beat vocals of Rakel Mjöll.

The smell of sweet of horse manure bristles on the wind from the equine enclosure by the gates, and Melenas kick the shit higher back in the church with shimmering Spanish Pop cuts. The drink starts talking after the long slog, and when 11 o’clock comes it’s neck-deep in the locomotive shed disco, where new Cardiff night Asking For a Friend bungs us sounds through classic indiepop to Ash and The Ramones. How Does it Feel to be Loved? puts the hat on it back at the Golden Valley campsite to a blaze of Northern Soul and indiepop, and the heart of Saturday night stops at 4am, eyes looking in different directions.

Tent tops are viewed through the bottom of tankard glasses Sunday morning. Dust lines the hair of the late night dancers, and Just Blankets throw off the covers on site with driving rhythms flying through the train shed. It’s another world at Sunday church, Tekla filling it with the dreamy and downbeat, every note hanging like a chain of a poem sent up Jacob’s Ladder, pure poetry, pure Pop. Wolf Girl on the outdoor stage are an indiepop doo-wop dream, rattling with a rare lyrical soul, and Boyracer, following on, are a big fuzzed up Fuck Off falling over itself into classic Pop. Back at the shed, Anna Burch hits it with lilting honey-pop cuts, and Haiku Salute outside float their soulfully crafted and lyrical instrumental boat off to the shores of Brittany. The Indietracks bliss haze descends over the following hours, and the late night clubs throw down their ropes.

Recordsville Social make a great discoteca in the marquee, crafting a dancing journey in the dusty haven through Felt to Kirsty MacColl and finally the Television Personalities, and Katie from The Just Joans’ Time Machine goes through the gears from the ‘60s to now in the shed. The final stop for this year is, as is tradition, at the Golden Valley campsite, where a dishevelled fleet orchestrated by Fortuna Pop! dances till there’s no more.

It’s been another beauty of a weekend amidst the Indietracks congregation around Butterley station. Pop has lived again as communal experience in this blessed corner, its marginal cultures making the wave. The drunken angel has oiled the wheels of the Midland Railway for another year.