Visit the pound shop in Canada Water, get yourself a pot of fruit bats, a bag of edible lipsticks, an expressionless Venetian mask, a Miss Piggy shower cap and a luminous midget skeleton as a companion, and sit down for an hour or so of misshapen twilight pop… I’m going to begin this mix with Veronica Falls, since if I didn’t I might not be able to go on, and might just end up making little cat-dogs from blue tack for the rest of the night. The band loom like a cathedral over the gothic Pop landscape, and ‘Found Love in a Graveyard’, from their 2011 Veronica Falls set, takes your dying soul and leads it through the sewers of isolation to the altar of melancholic empathy, its two-part harmonies forming your heartbeats, its lyrical sentiment opening your zombie eyes. The new album, Waiting for Something to Happen, in its entirety shimmers like a rainbow in a black bag. And though none of the songs have “Graveyard” in the title, the appropriately-named ‘Buried Alive’, which is no.2 on the mix, is like finding an Edward Scissorhands poem encased in a snow globe on an evening walk through the cemetery on Christmas Eve. 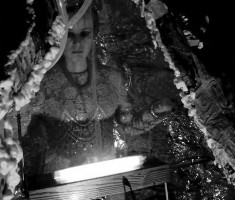 The inevitable having been undertaken, for no.3 we’ll take a broomstick back in time to the ‘60s, and Ultimate Spinich’s ‘Ballad of the Hip Dead Goddess’. The track has a deadpan spoken monologue for the “hip dead goddess”, whomever she may be, bells that sound like they’re ringing in the graveyard of your childhood dreams, an instrumental interlude for a theremin, and a vocal by Barbara Hudson that foretells the mystery-folk of Josephine Foster. I couldn’t tell you much else about Ultimate Spinich, but by dint of this, the only track I have by them, they seem like the kind of bunch that would have been making rope swings under bridges for kicks rather than attending record label meetings in the ‘60s psych-rock boom; the kind of bunch that would have chosen trick over treat every time had you arrived on their doorstep on Halloween in your gimpsuit. 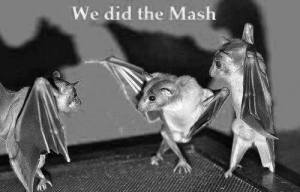 Steve King and his gang could have been swinging out on the same rope if they weren’t in another part of ‘60s America, likely under a bridge of their own. No.4 on the mix, King’s ‘Satan is Her Name’, has slow flickers of guitar and a diabolical lyrical engagement with his “lady in black”, who responds erotically as the higher pitched guitar soundtracks the shagging. King sounds like Roy Orbison projected back two decades in the imagination of Russ Meyer, the guitars suggesting him three fingers up in a spider web & graffiti-strewn back-alley grotto.

Where King screams sex in Dracula’s bohemia, and Veronica Falls turn full moon melancholy into tainted ecstasy, listening to Tullycraft is like getting on a Pop rollercoaster with the best gang in the world after you haven’t had a friend in 10 years. The new album, Lost in Light Rotation on Fortuna Pop! (CD/vinyl) and Fika (cassette), takes you by the hand and dances you through the shit and piss of your life, pressing all your erogenous zones with profound lyrical fingers and making you purr inside as you whack it on repeat. ‘Dig Up the Graves’ of course is the choice for this mix, a song that runs to the cliff edge and jumps like a collection of all the best Pop music you’ve ever heard hurtling towards the rocks with your heart and your soul. Whenever you wake up from this, it’s too soon.

As far as country music goes, Neko Case and Her Boyfriends’ ‘Porchlight’, from the 2000 LP Furnace Room Lulluby is as “gothic” as you get. There’s a ghostly shimmer to its lilting and lonely musicality, and Neko’s voice is at its most profound – pitched somewhere between Patsy Cline and Kathleen Hanna. If you like vocals that roar in and make your spine tingle like Monica Queen’s in Belle and Sebastian’s ‘Lazy Line Painter Jane’, effortless and raw as sand, then really you should get this album. It, and particularly ‘Porchlight’, is dusty old gold, stained of course in pound shop blood.

Tyrannosaurus Dead are building their own twisted, Gothic, heartbooming cathedral of sand in the language of Pop. Their ‘Misery Guts’, from the Lemonade EP, is no.7 on the mix, a track that has the implicit surface thrill of a swim in the woods at night, guitars fluttering like vampire bats overhead as the coolness of the water consumes, till all that’s left is a feeling of primal ecstasy, a rush of adrenalin that’ll take you on and on. Tyrannosaurus Dead are a runaway ghost train to the wilds of your heart, a fragile bat-mobile direct to the indie dancefloor of your dreams.

French for Rabbits, whose ‘A Ghost’s Broken Heart’, from their Claimed by the Sea EP, is no.8 on the mix, have a sound more like the forest coming to life in the morning, albeit in a hazy mist. It’s a thing of delicate, wistful beauty, the sweetest of lyrical sentiments expressed over a twinkling, gentle rush of guitar and piano till it dives headlong to a stop. The title track of the EP is another that sounds like it fell out of a moving pastoral dream, distorted bird noises mingling with a lowly-whistling guitar; enough to charm the nails from Nosferatu’s fingers.

Up at the Garage in Islington last Friday night, there was a dancing beatpop frenzy, orchestrated by some beautiful cats full of the possibilities and poetry of Pop music – despite their name. The Death of Pop’s ‘Don’t Hang Around’ can only really be seen as gothic due to its smartly distorted, dancing guitars, which resemble The Cure, The Smiths and Veronica Falls at the same time, whilst ploughing their own ghostly furrow deep into the hearts of those on the outside of everything. ‘Don’t Hang Around’ is a song chiselled from raw indiepop gemstone with the most delicate of hands; an instant dancefloor riot with the soul of outsider lovers and the joy of summer blooming through the window. The band is only four or five gigs old at this point; ripe to claim as your own and hold tight to your heart.

Another band alive to the myriad possibilities of Pop music are Flipron. ‘Superstition Has Its Uses’, from their new Firework Shoes LP on Tiny Dog records, no.10 on the mix, has a lyrical touch from another dimension, creating an imagined window into your innermost soul which your ancestors peer through with raised eyebrows as your conscience croaks. There’s an existential rock’n’roll piano and a haunted house organ & mandolin here, each trickling over the other in an orgy of musical wondrousness. Flipron are a band so far out of any modern media categories of music that you have to step back for a moment and conjure in your mind a pirate ship to ride the seas of bullshit to find them. The reward is a glimmering chasm of poetry and musicality that you can sit in like a treehouse over the Thames, lighting your pipe and watching the boats go by as past and present dreams are piqued.

If you’ve sailed your imaginary ship out to sea in such a fashion, another that might come rolling in in your net are The Bobby McGees. Their ‘Jelly and Icecream’ is like a dream Ken Nordine might have had had he been dragged under Brighton pier by a toothless lady after a lindy-hop session at 7am, and hit three times with a baseball bat. It’s a montage of sounds that could have fallen out of the minds of dribbling jazzmen at home only on Wanted posters, misfits who eat the dead souls of trads in dark alleyways and recycle their dreams for sustenance. The soon to be released McGees LP, Bon Bons, on Cherryade Records, has a brass section that swings like it’s 3am in ‘30s New Orleans & you’re upside down on some steps after Kerouac draped the handkerchief. It also has an inner lyrical world that’s sweet, poignant and funny at alternate times.

To conclude the mix, what else but a call to the Pop kids to gather around for “a minute or two”, which then turns into the best rock’n’roll party of your life? ‘Vampire Girl’ is Jonathan Richman at his feral best, surrounded by the Goths of his dreams, perhaps the hip dead goddess and Lucy Harker from Herzog’s Nosferatu the Vampyre, and making a cartoon paean to the party to die for. “Evil now, scary now, yeah yeah yeah – I get so intrigued, when they look like a vampire girl”. Smear the rest of your lipstick on the walls, shut the curtains, turn out the lights, slip on your rubber skintights & hang yourself from the curtain rail.